“Why are Swedish female pop stars always so brilliant?…”  – The Guardian 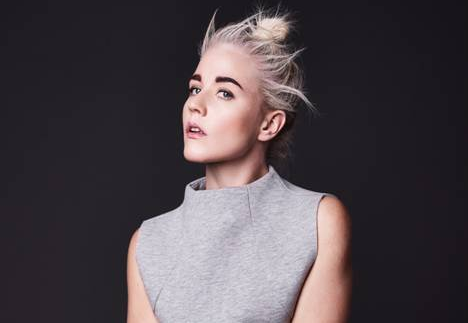 Stockholm melody master Vanbot has announced her return with upcoming albumPerfect Storm, the electro-pop purist’s follow-up album to her 2011 debut. Riding on the acclaim from the likes of Nylon, The Guardian, Pop Justice, Interview Magazine and MTV, the Johannes Berglund (The Knife, I Break Horses) produced & mixed record sees Vanbot embark on a darker and more evocative spectrum than previous outings.

Shelving a virtually complete album in 2013 after a creative breakdown, Vanbot (real name Ester Ideskog) began anew and vowed to lean away from musical norm in search of a greater bite and growl. Despite the change in direction, Vanbot still thrives on the same DIY spirit and never ending enthusiasm for crafting unstoppable pop. The result is one of the strongest pop albums of the year so far, where every song has great single potential, whilst the complete listen takes one one a unique journey.

Perfect Storm is shadowy and dangerous and will rub soldiers with the likes of Lykke Li’s 2014 release I Never Learn and Robyn’s Body Talk series. Vanbot’s trademark melody perfection from previous releases remains but it has been made slicker and more pliable, now part of the wider conversation and not the sole focus. Driving beats and tense compositions now take precedence, with Vanbot now leaner, edgier and gloriously confident in her freedom to create exactly what she wants with part co-writers Jan Kask and Adam Olenius (Say Lou Lou, Tove Styrke, Shout Out Louds).

Perfect Storm will be released 15th May via Lisch Recordings and Sony Music Sweden, with Vanbot appearing in a number of European performances including London’s Hoxton Bar & Grill on 8th May.

A truly exciting band who have been likened to some of the shining lights of UK indie, Vida are a British four piece who are going places. Drawing comparisons to a wide ranging indie catalogue, including the likes of Oasis, Arctic Monkeys, Kasabian, The Black Keys, Miles Kane and more, their growing reputation has seen them garnering recognition from some of the country’s top tastemakers.

Their new single is a double A-side release showing two of the different sides of the group. First, ‘Electric Lady’ tells the story of repeated overnight stays with the same girl after meeting on several nights out, and the awkwardness that follows the next morning. Meanwhile, ‘Fade Away’ speaks of a completely different kind of awkward – finding yourself in the same room as an ex…

You can hear both songs here:

Already supported by Amazing Radio  for their previous single ‘Colour’, Vida have also been building their reputation on the live circuit. Having been handpicked to play XFM’s This Feeling shows several times, as well as four gigs at prestigious independent venue King Tuts in Glasgow, they also headlined a charity festival in Stirling to great acclaim.

Their appearance at the fundraising events mirrors their approach to music, offering fans something free in exchange for their ongoing support. Vida are known for handing out music and merchandise at live shows, free to music fans who go home with EPs, CDs, badges and more. This generous approach is spreading the word and helping to build a legion of fans, who will continue to build Vida into a force to be reckoned with.

‘Electric Lady’ and ‘Fade Away’ will be released on June 15th.

An alternative rock track with a tatsty hint of 80s electro dripped over the production.
The vocals are spot on and we’re lapping it up.We’d expect nothing less from a talent with a musical history as illustrious as Mair’s!

Husky voicals and a cool alt rock arangemnt…good ole beer is the only beverage to fit the bill.

Noel And The Pandas are fresh produce from Italy. The five guys are a cool rock band with a hearty story behind them. Their music is all from the hand of front man Noel and is a throw back to some difficulkt times he recently went through.

Protz music has the power to transport you into a world of bliss and you slowly drift away on his perfect composition.

The lack of lyrics in the music invites the listen to assume their own interpretation of the heavenly sounds.

Jesse Lowes is a natural when it comes to pouring your heart into your music. Every lyric from Lowes is laden with raw emotion and we must say, the track is a bit of a tear jerker.

Booze…Real Ale (From an independent brewer)

These guys deliver the very best of Folk. Go on a journey with them and get lost in their world trhough their story-telling style lyrics. You won’t be able to resist moving your feet…maybe have that ale first!

Witchingseason are no strangers to the world of rock. No band knows better than them how to make killer rock music. We think this stuff is on it’s way to becoming classics! If you like dark rock music and haven’t checked these guys yet, you’re missing out.

Booze? An artisan cocktail or some variety.

Delivering a stunning set at Berlin Music Week in September (Nordic by Nature stage), the band have confirmed their first London show will be at the JAJAJA Club Night at The Lexington on October 30th.

Driven by a crashing rhythmic force and insistent synth-lines ‘Stones in the Water’s lyric draws you into an almost mythical, shadowy description of nature: mysterious stones in water and tongues that glow in the dark.

Shane is an extremely talented composer that needs little introduction. His music emits pure beauty, he is undeniably a genius! The talented soul was inspired to write the track after seeing a painting by Henri Matisse. He was so taken with the beauty of the painting that he decided to compose a piece of music about it.