Its a rare thing indeed that an aural appreciation for a moment in time captures the romanticism of a state of mind so well. Leading track ‘Let it Rain’ of forthcoming Americana release for Rich Webb, which was recorded in France, takes on much in the way of its native surrounding. The album’s title ‘Le Rayon Vert’, is taken from a concept from Jules Verne’s novel of the same name which transcribes meaning behind ‘The Green Ray’, a naturally occurring phenomenon that occurs as the last rays of sunlight flash upon the horizon – said in this case to grant heightened perception to those who view it as a kind of conductor of true feeling.

The concept behind the band’s fourth release was derived from the 1986 Éric Rohmer film (released as ‘Summer’) in which a beautiful young Parisian girl frantically searches to appease her restless soul. This very much comes across in themes which explore openness, discovery and peer into dark, disquieted areas of a fractured mind. As soon as the track fires up, you can feel momentum gather as the wheels start turning. As the stop start chops of the medley take root, suddenly the swelling surge of a convoy comes into clear view.

As if lifted straight from a soundtrack, it carries it’s almost cinematic quality along for the ride. The overall essence is one of grounded desert county garage-rock, proudly proclaiming a certain swagger but with an understated tenderness that parallels the love story it’s loosely based upon. While working alongside acclaimed sound recordist Howard Bargoff – known for his BAFTA winning and Emmy-nominated work on TV and film – the exotic and rich level of live experience they have under their below has been brought to the fore in the energy and punch that the single forces home.

The overall feeling panders towards something in terms of an elegant charge, invigorating the rain soaked masses into movement as the crowds bustle and swell. Its journey saturates belief as it all comes together in a kind of circular completion, a taste of risen dust on the lips heightening a togetherness and yearning to wash away social division.

Don’t let yourself get caught behind the wheel supping your sandblasted lager-drink. 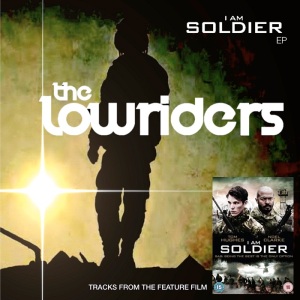 WHICH BOOZE? Several pints of lager

Out on March 31st, the new EP from The Lowriders is music written for hard-hitting indie Brit-flick ‘I Am Soldier’. The EP, of the same name, is as a result similarly hard hitting. With a spaced out indie vibe that brings to mind the likes of Kasabian, this three of this four song collection (the final track being a more electro-based remix) brings with it an immediate, raw feel. I haven’t seen the film, but based on this soundtrack we’re imagining mud, blood and thunder – plenty of which have gone into this EP.