In 1996 O’Donnell moved to Coventry where he became aware of the Coventry Carol and whilst touring Brittany learnt the traditional Christmas carol ‘Noel Nouvelet’. He decided to blend the two.

Joe O’Donnell’s Shkayla is now a power-house five-piece able to generate great energy and excitement, and also capable of the sensitivity and delicacy needed in keeping faith with Celtic music

The beautiful mash up of TLC’s “No Scrubs” and The xx’s Angels from Bastille is the perfect wind down track.

It’s beautiful sound would be perfectly accompanied by the original sipping spirit, cognac.

Grab yourself a drink, sit back and listen to the beautiful sound of Bastille and Ella Eyre…

Just in time for the summer, Justin Timberlake has delivered his first new song in three years. In the words of JT: “Put some sunshine in your pocket”. I’d reccomend kicking off your shoes, lying in the sunshine (hopefully) and enjoying this tune with a refreshing mojito to really get you in the summer mood!

Watch the video below and get the cocktail at the ready….

After the death of a close friend he was moved to create a song in his honour, taking inspiration from his friend’s popular saying ‘live everyday like it’s your last’ he named the track ‘Live it Up’.

Currently living in Manhattan, New York Speed Autobahn has been driving audiences so wild that both men and women have ripped their shirts off as they danced and raved. Performing in some of New York’s most famous venues such as Harlem Shrine, Santos House Party, Brooklyn’s Paperbox and also Fame Festival in Atlanta, GA he was introduced to the rapper Fat Joe earlier this year who encouraged him to aim for the skies with his art, saying “ your friends and family are not your fans, focus on creating music that people from all over can appreciate and love”. Having toured with the punk rock band and his producer Danny Switchblade, speaks a lot about the immense quality of music they express together.

In addition to his fantastic accolade his music has been featured on the award winning YouTube web series “Ghetto Nerd Girl” Speed Autobahn is set to tear his way up the music industry.

The single continues to showcase the band’s love of sixties psychedelic rock, whilst also adding in some uniquely fresh quirks including some spooky opening strings and a crunchy shredding guitar solo towards the end of reminiscent of Jimi Hendrix.

A stylish video accompanies the track featuring the band riding a 1965 Ford Mustang, reflecting  the band’s love of retro. The video was directed by Romain Renard and stars dancer Chloe Alexandra Atherton from Blackpool /UK (who regularly performs at Paris’s legendary Moulin Rouge), as well as models Aline Tran and Petula Goldfever.

The band are set to a release an upcoming album, which is being recorded in London. On top of this, they have plans to release a 7” vinyl containing singles “Turn Around” and “First Class”.

Like the music video for ‘Turn Around’ (which has already racked up over 30,000 views), this new music video is made using stop-motion animation. The video is a perfect representation of the band’s relentless creativity and genius.

Cool Rider Crunch is out on iTunes August 8th

Lambert has been successfully performing in the UK, recently he took time out to banter with the crowd, he started off with practicing his British cockney accent.

He said: “Yeah! You al’ righ’? – That’s all I’ve got. My British accent is bullshit. It’s awful but I’m going to keep trying and do it and by the end of the night you’ll be like ‘Oh Gawd, he’s tawkin’ li’ us again’.

“That’s actually my problem, with trying to do British dialects, is that I can’t tell them apart. There’s so many, and they’re all so cool. I really like being here, I feel like, it’s like being on safari or something.

“You guys having fun? Thank you so much for seling out this mother fucker. I actually don’t know if we’re sold out so, I hope that was right. It looks like we are and we all want tequila!

“I love tequila. I’m not an alcoholic, I’m an alcohol enthusiast. I’m a big fan!

Take the day off, stay at home and listen to this song over and over. It will be time well spent.” – Richard Kingsmill, triple j

Outfitted in Dr Martens, tight jeans and glitter, Destrends are a Melbourne based three-piece quickly building a reputation as a distinctly theatrical live band with a sound influenced by early 80s post-punk. Their sound is a unique blend, reminiscent of the new wave sound of the late 70s and early 80s, with a gentle touch of gothic hysteria.

“Papa” is the first offering off Destrends’ forthcoming debut EP, which is set for release in late 2016. The Melbourne post-punk three piece have clocked up a handful of impressive gigs since forming in 2014, including sharing the stage Mark Lanegan (Screaming Trees, Queens of the Stone Age), touring with Stonefield and Apes on their recent national tours, supporting Aussie icons Hoodoo Gurus, and performing at King Gizzard and the Lizard Wizard’s inaugural Dawn of Gizzfest.

Recorded by Finn Keane at Head Gap Studios, “Papa” is loud, fast paced and aggressive whilst maintaining pop sensibilities. The track is characterised by a jagged and catchy guitar hook, and the listener is confronted with deep and compelling vocals. The song narrates an honest guilt and desperate plea for a father’s forgiveness.

“The song is about the time I ruined family Christmas”, said lead singer/bassist Matt Savage. “It’s also about finding your identity and learning when to shut your mouth”.

The Auntie of Anthony and Patrick Turner is Roy Hodgson’s sister. A family gathering at her house is inevitably football orientated with regular discussions on Roy’s team selection and tactics for the forthcoming European Championship.

Every supporter wants to be sitting in the stands watching their favourite team play their best and some may then be inspired to write an England anthem but not many can say that the song was conceived on Roy’s sister’s sofa!

Anthony explains how the brilliant anthem came to life: When you’re surrounded by pictures of Roy Hodgson and listening to fascinating anecdotes of his career, it’s not surprising I dreamt about England winning the Euro, but they were chanting a song that I had never heard before. The next day all I could remember when I spoke to Patrick was some of the melody and ‘Come on England’ . Patrick suggested that we try and realise the vision, by writing a song called ‘Build us a dream’.

Though this track is undoubtedly a rather amusing piece in terms of its origin, The Turner Brothers are on a very serious musical journey having been voted ‘Crowds Favourite Band’ at Hogsozzle Festival both in 2014 and 2015 they are taking on the stage at this year’s Victorious Festival alongside Annie Mac and Manic Street Preachers. 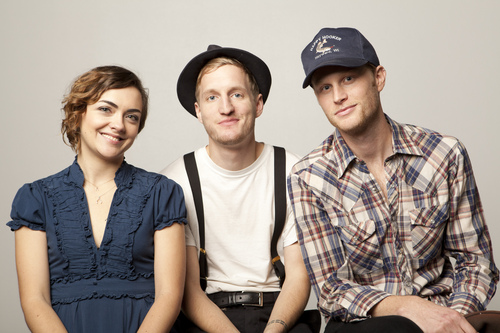 The drink: The Jude Law

Ingredients: Two Long Island Iced Teas (all the clear liquors in the well on ice – twice).

How to make it: Pretty easy, just drink all of it.

Why it’s great: Welcome to the jungle…

Listen to their new album “Cleopatra” on Spotify now!

In Cleopatra, The Lumineers set about trying to make musical sense of their three-year-plus roller coaster ride that was their first album. Their skill at setting a visual story to music comes through amidst the delicate, deceptively simple acoustic soundscapes. This time, though, bassist Byron Isaac provides a firm, low-end on the apocalyptic opener “Sleep on the Floor,” a ghostly tune about getting out of town before the “subways flood [and] the bridges break.” It’s a densely packed, cinematic song that echoes Bruce Springsteen’s “Atlantic City” and John Steinbeck’s East of Eden – which were models for the record alongside Bob Dylan, Leonard Cohen and Jack Nicholson in One Flew Over the Cuckoo’s Nest.